I am Aaditya Purani, and before a month i found out a Persistant XSS issue on Intel, but Intel has some different Responsible policy, they don’t allow Researchers to do pen-testing without their permission else they might take actions. So i contacted them and ask for permission which they agreed and in few days i reported them Persistant XSS and it got approved.

“Intel Corporation is an American multinational technology company headquartered in Santa Clara, California. Intel is one of the world’s largest and highest valued semiconductor chip makers, based on revenue. ”

So here is what i got 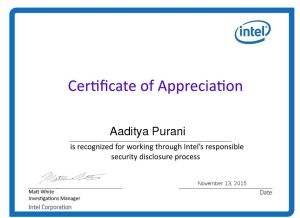